I hope you guys are having a great Wednesday afternoon. Its been kind of a lazy day so far. I read a little bit this morning and finally cleaned out my inbox since I had so many emails that I had saved to read later. I did have an afternoon phone conference that I needed to do and just ended that a little while ago. I’m now catching up on blog posts and I have two homework assignments that I would like to get to this evening as well.

This is of course later than I intended it to be, but finals kind of put everything on the back burner and I finally had a week off this week before I get back on a normal work schedule again. I plan to catch up on blog posts over the next couple of days so there will be about four more or so coming between tomorrow and Friday.

So, about halfway through the month, I discovered Discord through the monthly O.W.L.S. readathon based on Harry Potter, and decided to go ahead and join. I’ll have a separate post up for that where I’ll keep a record of the books that I read for that challenge. After that, I found a whole bunch of readathons that were occurring in May and of course decided to join since I knew I would have a more laid back schedule in May.

April was an interesting and incredibly busy month. April is one of those months during the year where I would either be able to squeeze in some reading or I would be so busy that I would be too tired most of the time to read. This was my last April of my school career so that is a plus. Right about the end of March I got into a reading slump that ended about halfway through April which was around the time that I signed up for owls. 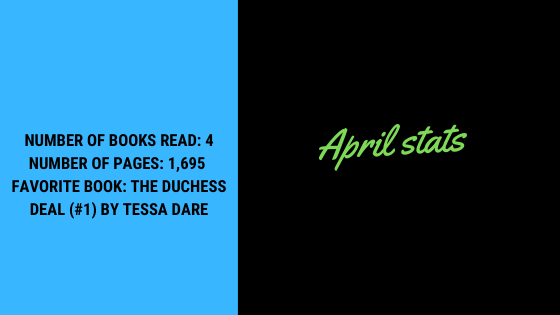 Overall April was a relatively good reading month as I finished some books that I’ve been trying to read for ages which was nice. I also finished another trilogy, continued another series and started two other series as well.

Overall, not a bad month of reading, though I did plan to read some other books that I had on my kindle which I unfortunately didn’t get to this month. I’m currently slowly working my way through The well of ascension by Brandon Sanderson, but it is slow going for me. I’m hoping to finish it by the end of the week so I can read other books that I have planned for this month.